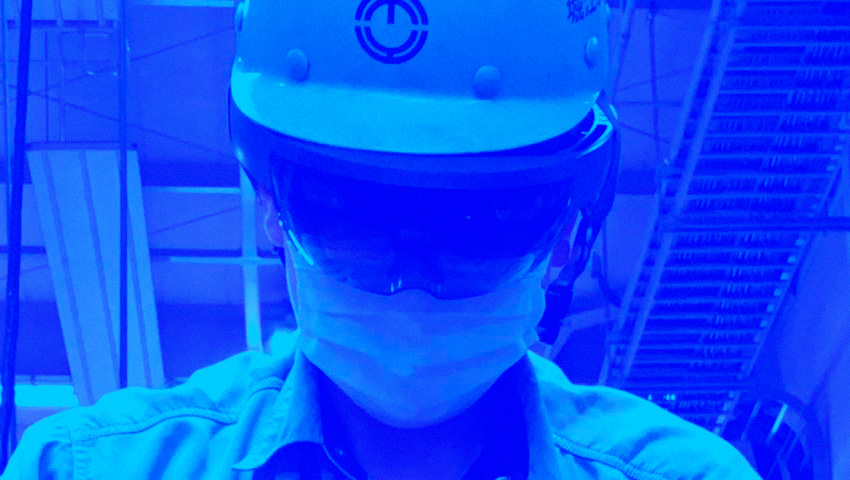 TOKYO – Mixed reality goggles are being introduced into workplaces in order to give long-distance technical guidance and hold remote conferences amid the coronavirus pandemic, but still face challenges such as increasing the variety of headsets and cutting costs.

Holding a part called a fulcrum pin, he could see displayed around it illustrated instructions on how to fit it into the brake unit. By looking at a label saying “next” for two seconds, he could proceed to the next step. “I don’t need to worry about staining a paper manual with oil,” he said at the facility north of Tokyo in Hidaka, Saitama Prefecture.

Horie has been in business for 53 years. Handing down its experienced workers’ technical skills has been an important task for the relatively small Tokyo-based company. “Telling workers, ‘Learn your job by watching how your superiors work’ is not effective for all workers,” said Yasushi Horie, president of the company. However, a paper manual would run to several hundred pages. Hence he got the idea of using HoloLens.

The company took two years to develop a HoloLens application that can show 127 processes, including disassembling brakes, in mixed reality. It introduced the smart headset into the workplace in August. The device has been welcomed by new employees. Horie said they told him, “I can find answers to my questions even when my senior is so busy that I cannot ask him” and “I can practice outside the factory as well.” Although the introduction of the device, including the development of the app, cost several million yen (tens of thousands of dollars), “it was not expensive considering that we can hand down the skills and techniques more efficiently,” he said.

Mixed reality is a technology for inserting virtual images into real-world views using head-mounted devices. It can show more complex information than augmented reality, a technology used in, for example, the popular smartphone game Pokemon Go.

Last November, Microsoft marketed a new HoloLens model that provides a field of vision twice as wide as the old model and is more comfortable to wear. The company has enhanced its support for users to develop apps, helping the community promote the spread of the device. 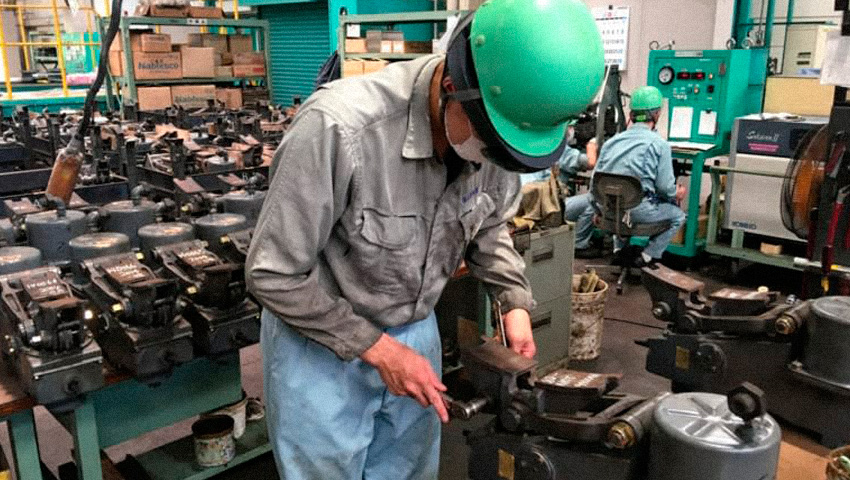 Musashi Seimitsu Industry, a major auto components maker affiliated with Honda Motor, began using HoloLens at its factory in Mexico in May. The company teaches workers procedures through HoloLens because the pandemic has made it difficult to send engineers from Japan. “We want to reduce the time and cost of personnel movement by introducing the device to other factories around the world,” said Hiroshi Otsuka, the company’s president.

Toyota Motor is another company conducting research on the devices. The automaker is considering distributing them to mechanics at its dealerships to make repair and maintenance work more efficient.

HoloLens has also begun to be used for white-collar work as employees telecommute amid the pandemic.

When I put on a HoloLens headset and looked around, a man appeared in empty space, saying: “Hello. Nice to meet you.” The resolution was low but the image had depth because cameras and sensors had created three-dimensional data of the man to project through the headset.

Just as video calls can convey subtler nuances than text chats, 3D images further increase the impression of actually talking with other people face to face.

Itoki has up to now designed office furniture and spaces for the real world. From now on, “We want to support people who work in virtual spaces,” said Takashi Nii, a team leader at the company’s Advanced Institute of Technology. Itoki wants to provide the system as a service for corporate customers as soon as possible, after completing demonstration tests.

HoloLens is also expected to be used in the medical field, including in supporting remote surgery. As more apps are developed, mixed reality will likely be introduced into all kinds of workplaces. 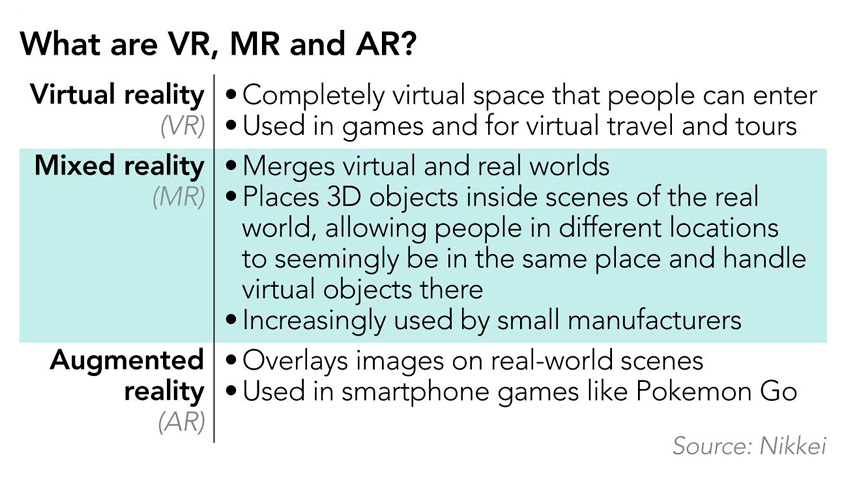 The blanket term for the technologies that encompass mixed, augmented and virtual reality is “extended reality.” XR glasses hold the most promise of being the next big thing after smartphones, an executive of the U.S. chipmaker Qualcomm told an event in 2019. According to Yano Research Institute, the Japanese market for extended reality devices and software alone was worth 395.1 billion yen ($3.72 billion) in 2019. The market will expand with the spread of 5G, the next-generation mobile communications standard, Yano said, and is forecast to reach 1.2 trillion yen in 2025.

Virtual reality headsets are used in many games. Oculus, owned by Facebook, had the highest share of the global market for VR devices in 2019, at 31%, according to U.S. market research firm IDC. Sony, which sells the PlayStation VR headset, came in second at 23%.

Competition will intensify. Apple acquired a company that develops imaging technologies such as virtual reality in May, raising speculation that the company was developing a head-mounted device. Google meanwhile acquired a similar company in June.

As for mixed reality, the U.S. startup Magic Leap is selling devices, but besides it and Microsoft there are few other companies operating in the field. The new HoloLens 2 model is pricey, at about 420,000 yen in Japan and $3,500 in the U.S., and the cost of developing an app for it remains higher than for smartphones because of the complexity of the technology. Further reduction in obstacles is necessary for the market to grow.